Liverpool FC’s Steven Gerrard faces the Chelsea FC crowd at Stamford BridgeNow I must admit that the headline is a bit misleading. Carlo Ancelotti is not upset with potential transfer target Ashley Cole and desperately wants the Englishman to return to the Blues this season and not join La Liga side Real Madrid. 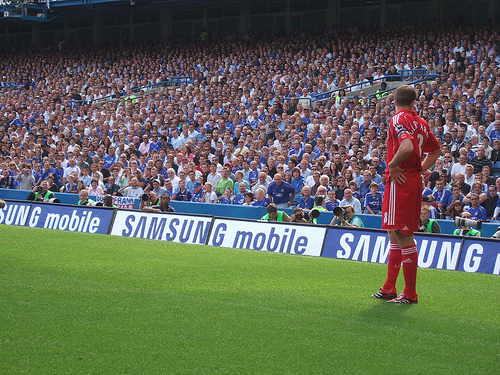 But former Blues man Joe Cole is another story with the former AC Milan manager.

Ancelotti certainly didn’t offer many positive parting words when he recently suggested that the new Liverpool man was unteachable. When comparing newly acquired Yossi Benayoun to Cole, the Italian praised his transfer while completely disrespecting the departed player by suggesting that he does not listen to coaching instructions.

Joe Cole is quicker than Benayoun but Yossi is better tactically. He understands what I tell him. Yossi is a very intelligent player. He knows everything about the game. Cole and Benayoun are different players and everyone has their own opinion, but we are happy to have Yossi here at Chelsea.

It’s an interesting criticism so soon after the star’s departure and perhaps it was meant to be more of a compliment to his new five million pound transfer of Benayoun rather then a knock on Cole. But I think it is safe to say that the comment was a rather blunt one and if Ancelotti worded it differently then maybe it wouldn’t have sounded as bad.

Joe Cole played seven seasons for Chelsea and was irregularly used in the last few campaigns. In fact the midfielder only scored 2 Premier League goals each of the last two years and started well under 50 percent of Chelsea’s matches. Yossi Benayoun, on the other hand, is a former Reds player and has scored 14 Premier League goals over that same two year stretch.

1xBet Azerbaycan is our most generous patron!